A new gene for Elias

When babies kick their legs and smile, it always seems like a small miracle to new parents in the rush of happy hormones. But the fact that Elias, now one year old, can smile and kick is indeed a miracle, because the little boy was born with spinal muscular atrophy (SMA). Without treatment, most children die within a short time from the congenital and rapidly progressing muscle atrophy. The fact that Elias is alive and will continue to bring his family much joy in the future is thanks to the expansion of newborn screening to include the disease SMA, as well as the doctors, researchers, nurses and the staff in the laboratory at Heidelberg University Hospital (UKHD) and a modern gene therapy.

When Elias is born in Bad Mergentheim in October 2021, there is nothing to suggest that anything could be wrong with the little boy. All examinations at the hospital are unremarkable and the parents are discharged with a healthy child. He charms everyone around him with his lively manner and big brown eyes. At home, his siblings are waiting for him enthusiastically.

As is customary in newborn screening, Elias' pediatrician draws some blood from his heel while he is still in the hospital in the first days of life and drips it onto the filter paper of a so-called dry blood card. The blood card is sent by mail to the laboratory in Heidelberg, where it is examined for abnormalities. Cards from Rhineland-Palatinate, Baden-Württemberg, Saarland and parts of North Rhine-Westphalia arrive there every day. In July 2021, newborn screening at Heidelberg University Hospital was expanded in a pilot phase to include two hereditary diseases: spinal muscular atrophy (SMA) and sickle cell disease. Since September 2021, both diseases have been integrated into newborn screening throughout Germany. A stroke of luck for the Wehr family, as will become apparent later.

"The aim of screening is to make the diagnosis as early as possible in order to start treatment in time. This is because, especially in the case of SMA, every day counts in order to avert irreversible damage," says Professor Dr. Georg F. Hoffmann, Director of the Center for Pediatric and Adolescent Medicine at the UKHD. He is responsible for this and other successful screening pilot projects at the Heidelberg site. These have been funded by the Dietmar Hopp Foundation for more than 20 years with around 16 million euros to date.

Elias has been at home with his parents Jessica and Martin for a week when the phone rings. The Bad Mergentheim hospital is calling the family with bad news. The blood test from the newborn screening showed that Elias suffers from SMA. A shock for the parents. "We couldn't believe at first that our son would suddenly have a fatal genetic defect. From one second to the next, a healthy child became a terminally ill child," the parents remember the day of the diagnosis.

Within three hours, they had to be in Heidelberg for the appointment with Dr. Andreas Ziegler. With a travel time of two hours from Weikersheim to Heidelberg on Friday, this was a sporting challenge. And the twins also had to be brought to grandma's house quickly. But the family manages everything and a short time later sits with Dr. Ziegler for a consultation and discusses the next steps. Dr. Ziegler is a senior physician in the Section of Neuropediatrics and Metabolic Medicine at the Center for Pediatric and Adolescent Medicine and has been conducting research in the field of spinal muscular atrophy for years. 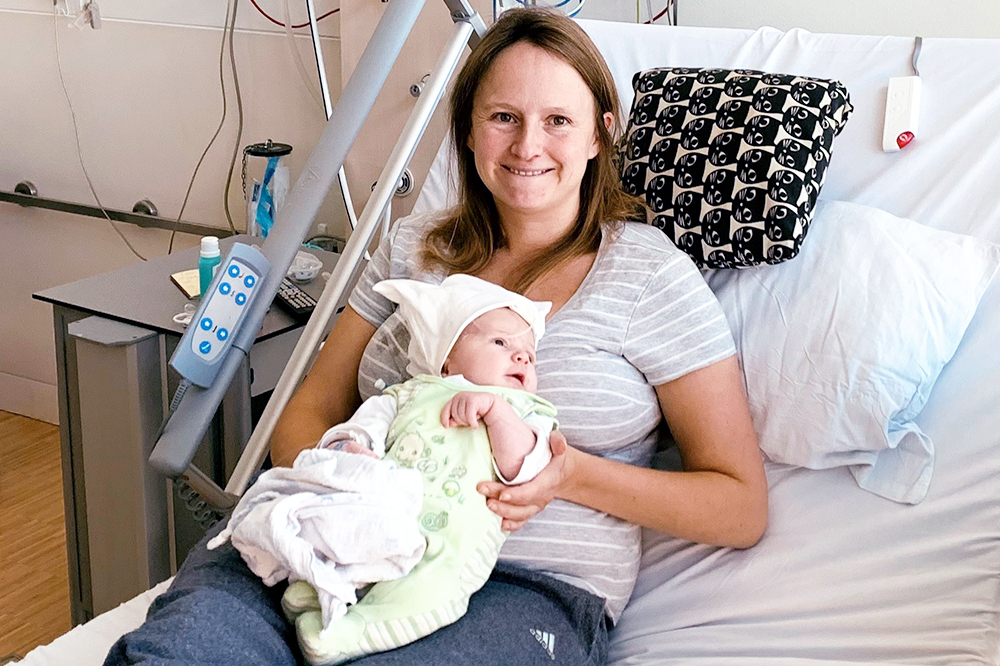 "At first, we couldn't believe that our son would suddenly have a fatal genetic defect. From one second to the next, a healthy child became a terminally ill child."

Elias was lucky that at his birth, newborn screening was now expanded nationwide to include the disease SMA.

Now, rapid action is called for. Because if left untreated, SMA is fatal before the age of two. "The disease is not that rare; every year, about 100 newborns in Germany are affected. One in 7500 newborns has SMA," says Dr. Ziegler. In SMA patients, the communication between nerve cells in the spinal cord and the muscles does not work due to a genetic defect at a certain point in the genetic material. Spinal muscular atrophy is only inherited if both parents are carriers of a defective SMN1 gene. The neurons in the anterior horn of the spinal cord responsible for motor function gradually perish. The movement signals from the brain and spinal cord are no longer passed on to the muscles due to the missing switching points, and patients increasingly lose the ability to move. In early-onset forms of SMA, muscle deterioration progresses rapidly and eventually spreads to the respiratory muscles. 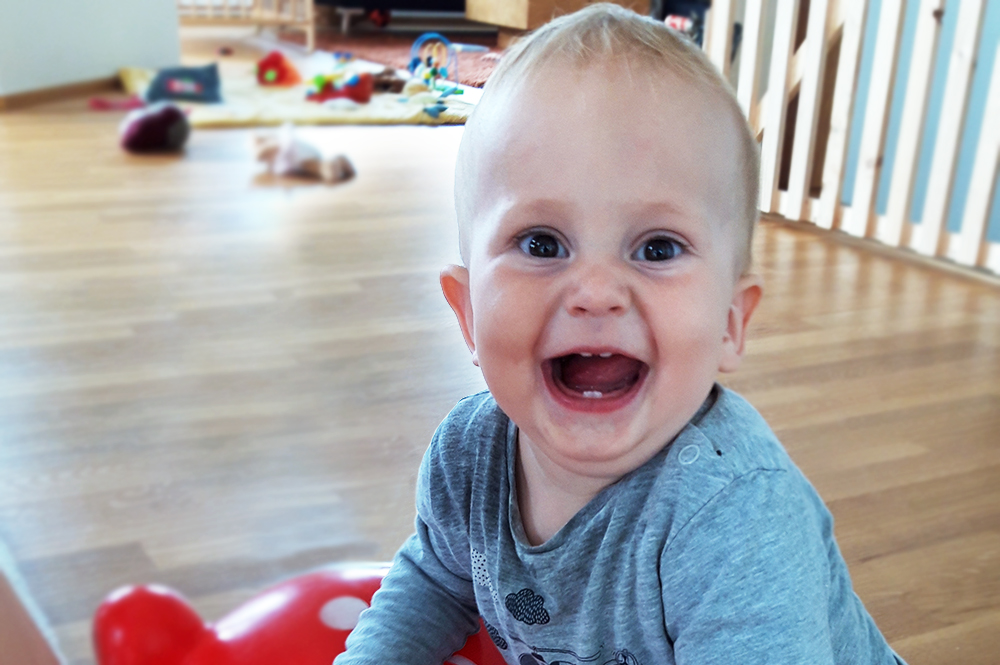 "We are very lucky that Elias has not yet had any limitations due to the disease. And even now, all control examinations are proceeding inconspicuously. We are very grateful and happy that the disease was detected and treated so early in our son." 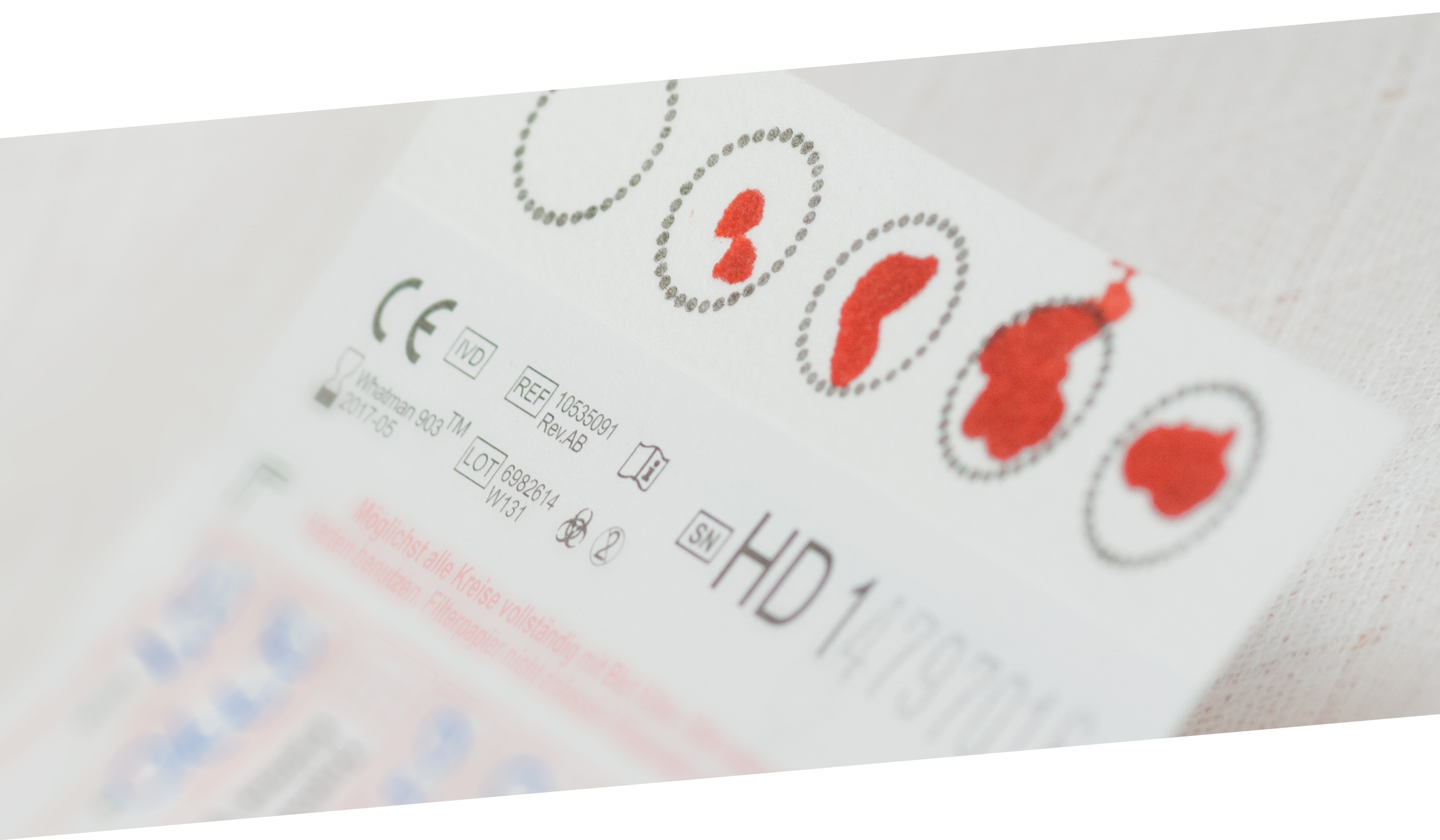 For Elias, who has that early-onset form of SMA, help comes in time. On his 16th day of life, he receives gene replacement therapy in the form of the drug Zolgensma - as a one-time infusion. "In this process, an intact copy of the defective SMN1 gene is introduced via the bloodstream into the body and thus also into the affected neurons via a modified virus. This ensures the survival of the neurons," explains Dr. Ziegler.

It is currently assumed that the replacement gene remains active for life. "However, since the therapy is still very new, there are no long-term results yet," says the physician. Side effects sometimes include temporary inflammation of various organs, but these can be treated well. In rare cases, liver failure can occur.

Elias was spared this and survived the treatment and the one-week stay in the pediatric clinic at the UKHD well: "He tolerated the treatment well," says Dr. Ziegler happily. 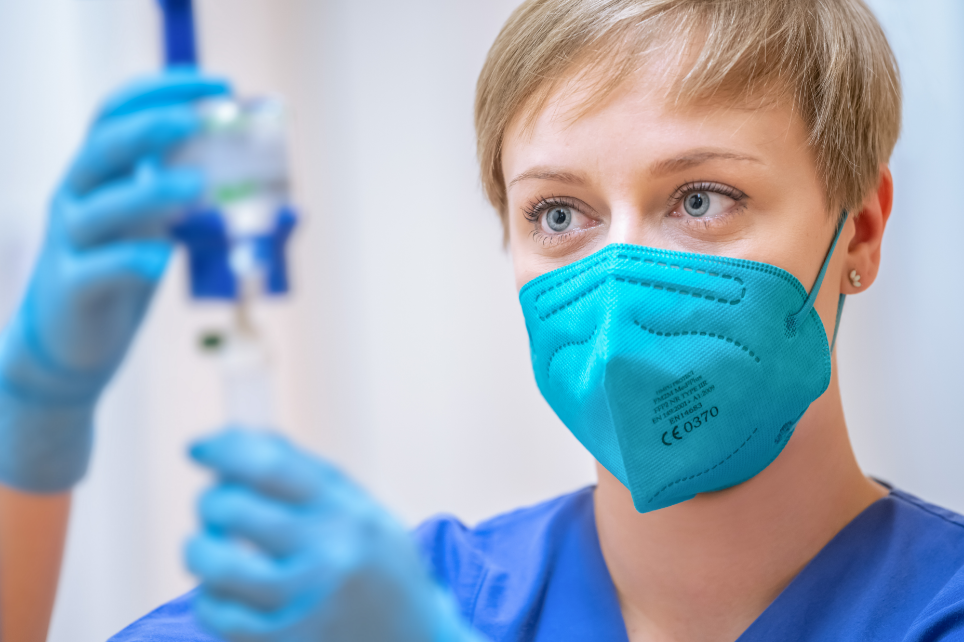 At the Heidelberg Metabolic Center, samples from more than 140,000 newborns from Baden-Wuerttemberg, Rhineland-Palatinate, North-Rhine Westphalia and Saarland 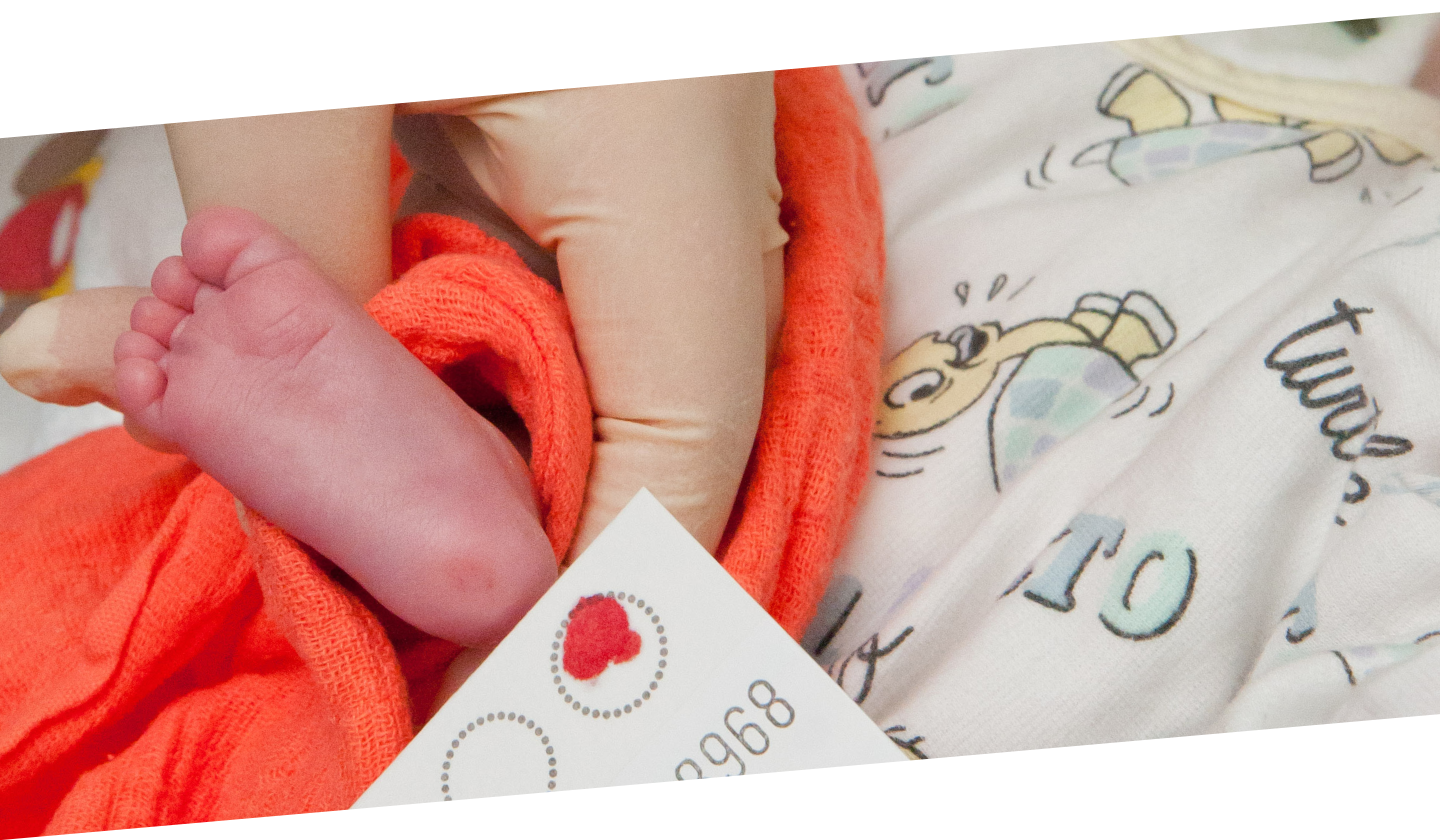 "Without therapy, Elias would be struggling with limitations by now and his life expectancy would be limited. Since his genetic defect was detected and treated at a very early stage, he has the prospect of a normal life," says Dr. Andreas Ziegler.

Elias is doing splendidly. Dr. Ziegler and Elias' parents are pleased with his development. He is examined every four months in Heidelberg to better understand the long-term course of the therapy, because he is the first child with SMA who did not show any symptoms of SMA at the time of gene therapy.

"Every little progress and positive development we celebrate," the parents say. "We are very grateful and happy that the disease was detected and treated so early."

At Heidelberg University Hospital, intensive research will continue in the future in the secondary prevention of childhood diseases …

… by including more pilot diseases in newborn screening and treating them early and efficiently with novel drugs.

With financial support from the Dietmar Hopp Foundation, the inclusion of additional target diseases in newborn screening is being evaluated. The foundation also supports the establishment of a professional infrastructure for clinical research in childhood and adolescence at the UKHD in the form of the so-called pediatric clinical pharmacological study center (paedKliPS), which is being set up together with the Department of Clinical Pharmacology and Pharmacoepidemiology at the campus.

In another pioneering health care research project, the Center for Pediatrics and Adolescent Medicine and Medical Clinic V, the Department of Oncology and Hematology, will work together from Heidelberg to create innovative structures for the use of so-called advanced therapy medicinal products, or ATMPs, in Germany, a project that will receive a total of 13.6 million euros in funding over the next few years from the Innovation Fund of the statutory health insurance funds.